I’m keeping notes on our current trip across the United States, which is going well and I will be sharing the details once we’ve arrived at my brother’s house and I’ve had a chance to process.

However, this is our second move from Pullman, Washington to West Point, NY and after the first one I wrote an email to friends and family to tell about the trip with my Mom, two boys and the gray cat. (Ric had gone ahead for training.) J.P. was three at the time, Josh was 16 months and I was twenty-nine for real that year. As far as I know, blogging hadn’t been invented but I saved the message which people thought was funny – like you laugh at videos of collapsing trampolines, I guess. I realize now that I had a tendency to try and put a better face on things at that stage in my life than I do now. So, here’s the story with a few editorial notes inserted in brackets below entries – otherwise it is exactly how I wrote it back then. 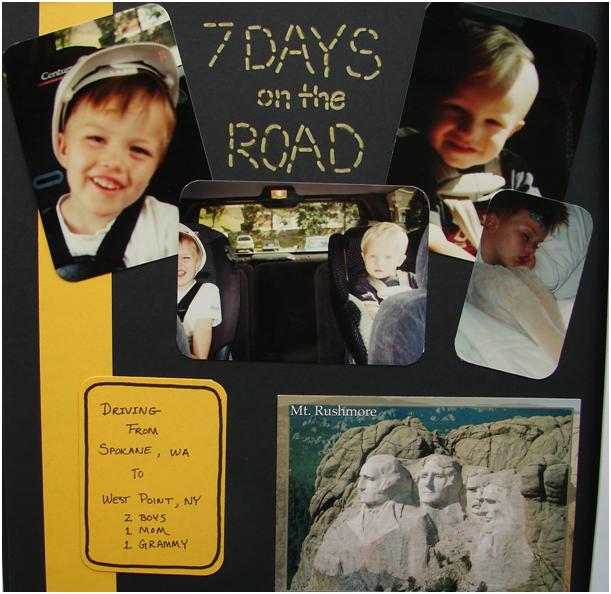 June 25th-July 2nd [2001] – Lisa and the boys in Spokane – We enjoyed a week of last visits with friends and family. We had an especially nice day in Clarkston with the Lindquist Great Grandparents. Lucas and Jeremiah got to spend lots of time together. Thursday afternoon Jeremiah split his forehead open on a rock when a toy bulldozer he was pushing got out of his control. Aunt Amanda and Grammy were on the scene and took him to the urgent-care clinic where he got 5 stitches put in.

[Traveling begins with stitches and all.]

July 3rd – [2001] Day 1 – Lisa, Karyn and the boys left Spokane at about noon and ended up in Bozeman, Montana. The scenery was beautiful. The children were wonderful in the car and we were excited about the trip. Ric officially started work by beginning the new instructor training course with the Chemistry department.

July 4th: [2001] Day 2 – The goal was to get to Mt. Rushmore for the night to watch fireworks, but that didn’t work out. The scenery was again beautiful, but the pace we would set was becoming clear – 375 miles per day was about all we could handle. We landed in Gillette, Wyoming for the night and enjoyed the best accommodations of our whole trip that night. Our room was on the ground floor, (much easier for Lisa the pack mule) and our door opened into the indoor courtyard including the pool and a piece of perfectly suited playground equipment for J&J to play on less than 20 feet from our room. We didn’t see fireworks, but we enjoyed some much-needed rest for us and release of energy for the boys.

July 5th: [2001] Day 3- We woke up and I took Jesse, the cat, to the veterinarian to get some antibiotics and have a wound on his head which had become infected and abscessed cleaned and drained. While I did that mom took Jeremiah to a clinic to have his stitches removed. Once that was all taken care of, we hit the road again planning to use Mt. Rushmore as our first rest stop of the day, but we ended up going to a place called “Bear Country U.S.A.” first. It was amazing – a drive-through zoo- with dozens of bears, elk, mountain lion, reindeer, etc… The boys loved it in spite of it being another 45 minutes in the car. Then we went on to Mt. Rushmore and realized while we were there that the engine needed oil. So, we stopped to get it checked in Rapid City – it was a very hot day and it was no fun to take the cat with us to lunch while the vehicle was being checked out. Once we hit the road again, we made it as far as Mitchell, South Dakota for the night.

[Ten years later I have to tell the rest of the story. That particular cat never had won a fight in his life but he decided to pick one right before we left on our trip. We heard all of the screaming, but our first inkling of the wound he incurred was while we were hauling suitcases into that Gillette hotel room. Then it became evident in a manner that I’m sure veterinarians can handle without losing their appetites, but Mom and I are not veterinarians. When we took him to one the next morning the solution was to shave a big patch on his head and leave a gaping hole in his flesh exposed to the air to heal. He looked – and acted – like something from a freak show for the rest of the trip.

Just wanted you to imagine that as you picture us “taking the cat to lunch”, but again, there’s more to the story. The Jeep was at a Jiffy Lube a few blocks of concrete oven away from a grocery store which was our only option for food. Obviously said cat couldn’t go in, so Mom sat on a mercifully placed bench in the airlock breezeway at the front of the store with him and Josh in the stroller while I took JP and a grocery cart into the real air conditioning. I will confess ten years later and a safe distance from my mother that I took my sweet time while she endured the parade of grocery shoppers filing past trying not to stare at the freak-show cat or gag on the raging diaper odor that began billowing forth the minute I was out of shouting distance with the diaper bag. Ironically the only picture I could find of the late Gray Gentleman shows him sleeping on a diaper-changing table – mocking my mother from his grave. ]

July 6, – [2001] Day 4 – Driving was getting pretty old and the scenery was less captivating than it had been up to that point. The boys were still being incredibly good in the car. They didn’t fuss, argue, whine or give us a hard time at any point during the trip. We counted this as a huge answer to prayer. We ended the day in LaCrosse, Wisconsin and stayed at a hotel in the middle of the river. After dinner we were about to take the boys swimming when Jeremiah crashed into the hotel room table and re-opened his head wound. It wouldn’t stop bleeding and kept swelling, so we got to visit another urgent-care clinic. The doctor pieced him back together with steri-strips, and told us he would end up with a very ugly scar because there was no way the scar tissue that had already formed would heal nicely where it had been torn loose along one side. Worst of all for Jeremiah was the fact that the doctor placed a moratorium on swimming for the rest of the trip.

July 7 – [2001] Day 5 – Really getting tired of hotel rooms, rest stops and driving by this point, but the boys were still behaving marvelously. We were rolling along nicely —-until Chicago. We spent two hours to go 8 miles on the interstate. That deflated morale and set us back considerably time wise, so we made it to Elkart, Indiana and called is a night. We realized at that point that all hope of making it a six-day trip needed to be abandoned.

[Another 10-years-later note: I think this was the night we decided eating a real dinner in the hotel’s restaurant would be a good idea. It wasn’t. Stemware, toddlers, frazzled grandmother, and a dead-tired mom didn’t mix well. JP at one point starting rocking his head back and forth repeating “It’s gonna be okay. It’s gonna be okay…” It was very sad.]

July 8 – [2001] Day 6 – The scenery started improving considerably and aside from a long traffic jam in the-middle-of-nowhere Pennsylvania, we made really good progress. We stayed at the lousiest hotel of the trip that night in DuBois, Pennsylvania, but at least the room was right next the entrance and our parking lot, so Lisa the mule, was spared some aggravation.

July 9 – [2001] Day 7 – The home stretch was beautiful and as smooth as silk. [FF 10 Yrs….Pennsylvania really was pretty – I missed it in our cut south during this trip but Kentucky was good deciduous-forest consolation. Anyway…] We made it to the Garrett’s house by about 3:00pm.

[Final Editing Note: At about 3:35 we tried to put the boys back into the car to go about a mile and a half up the hill to see the quarters we would be living in and we finally got our first temper tantrum of the trip. Josh considered the mission we’d been working on all week accomplished. We were at West Point, and he wasn’t getting back in the car without a fight. He is proud to this day of that line he drew in the sand.]

View all posts by Lisa Schumacher