Each year the incoming class of cadets concludes their Cadet Basic Training by walking back from Camp Buckner to the cadet central area a week before classes begin. It’s about six hilly miles in a car but they turn it into 12 very hilly miles through the woods after several weeks of ongoing fatigue and other forms of general unpleasantness. 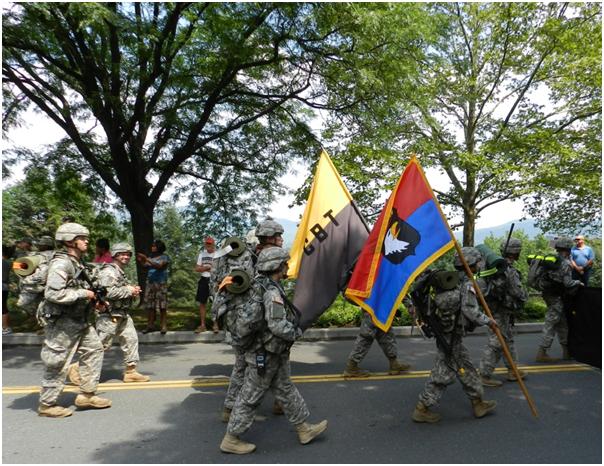 Families who live here and some parents line Washington Road and welcome them back as they reach the end of their trek. 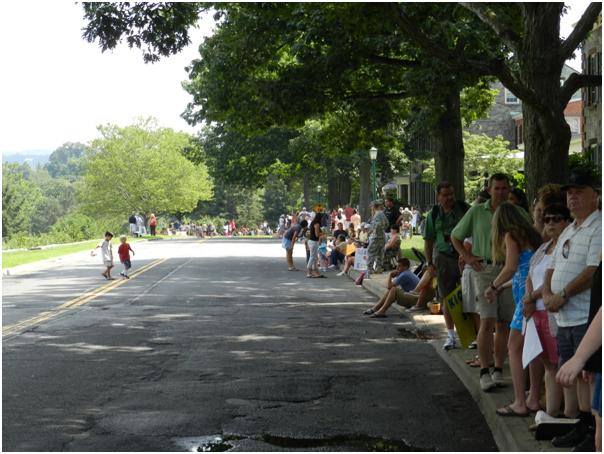 Chemistry instructors’ families traditionally congregate in front of a set of quarters known as the “Beat Navy” house where Colonel Dooley used to host a picnic every year. She’s retired now and the house is empty for renovation (I think) but it’s still the gathering point.

Surely this has to be the world’s toughest bunch of chemistry proffesors. If the combat patches don’t convince you, ask a cadet who’s taken General Chemistry here. 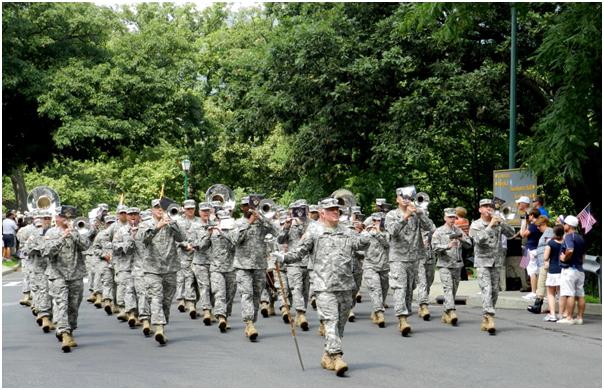 The West Point Band leads the way – for the final mile or so once the new cadets have reached the gate to post.

I just have to say that playing a trombone is impressive enough to me, doing it while marching in boots is amazing.

After the band, come the new cadets led by the Academy Superintendent, Commandant, Seargean Major and a representative for the Dean. 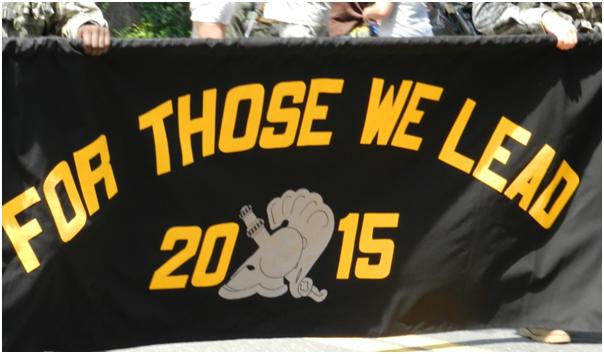 The new cadets at the front of the march carry a banner with their class motto. 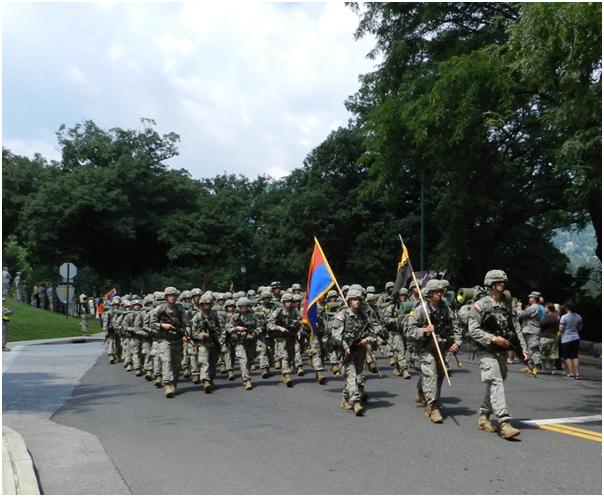 Here’s the first of eight companies.

There are about 1,200 cadets in this class selected from almost 14,000 applicants to enjoy this unique brand of collegiate experience.

By the time they have come this far they are hot, and tired… 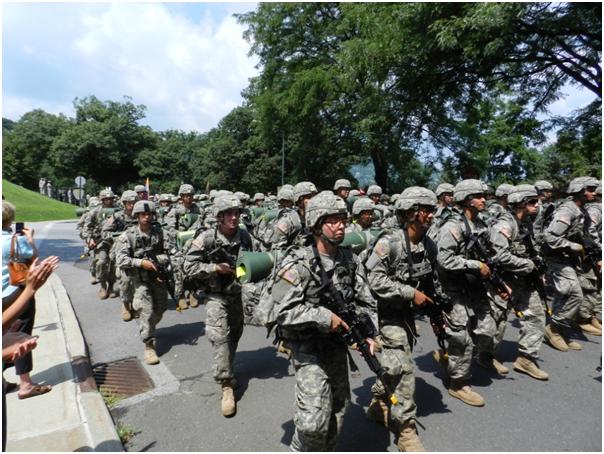 …just putting one boot in front of the other.

Each company carries a unit guidon and a flag representing a division in the Army.

They’re also carrying quite a lot of gear.

This is not supposed to be fun for them and by all accounts the week they are heading into will be even less fun. That’s when they get re-organized into the regiments of the full Corps and the ratio of new cadets to upper-classmen turns around on them.

Here’s someone smiling!  BUT…He’s not a new cadet.  He’s a rising senior, know as a “Firstie” and he’s been a company commander during their training.  My husband says he’s smiling because he knows what he and his friends are about to dish out to this new class, but I prefer to think that maybe he’s just a nice cheerful guy.

Here’s another one smiling! Another nice guy…hopefully.

By contrast, this shot of a new cadet captures the steely determination that they’ve all proven they possess if they’ve made it this far.

Most of them just look like they’re ready for the whole thing to be over with.

But, one company near the end broke into singing along with the Army song as it was played from a recording by someone on the curb. Impressive!

It only takes a few minutes for all of them to walk by but it probably feels longer to them. 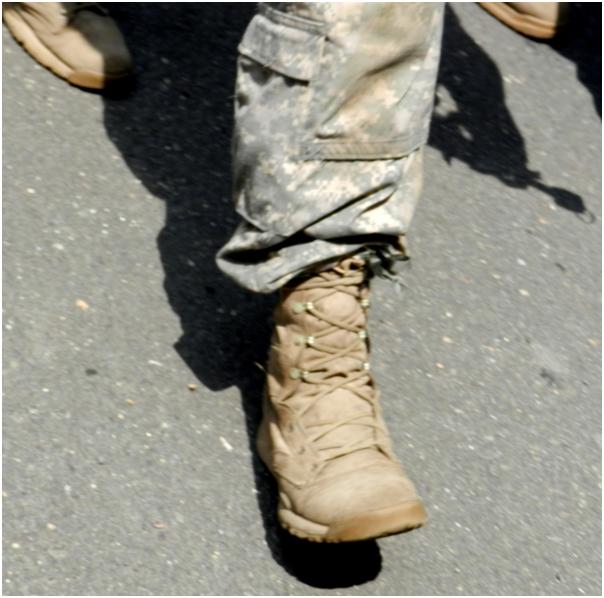 This was an accidental shot, but I thought it captured the essence of the effort pretty well with evidence of field training still lingering in the form of dirt on the knee. 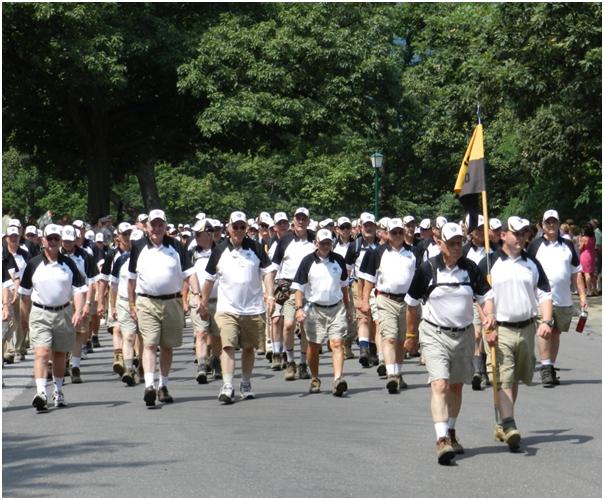 They were followed by graduates of former classes who remember the experience all too well I’m sure.

The final group was from the class of 1965, who will celebrate their 50-year reunion the summer this new class graduates.

The first time I saw this event, it was the class of 2005 marching and a former grad explained the training they had been through and what re-orgy week would be like for them when they reached the cadet area. As the pregnant mother of a toddler and preschooler, I recoiled inwardly at the thought of my babies ever being put through such an ordeal. Now, I look at them and think: “Oh, this would be so good for them!”

View all posts by Lisa Schumacher